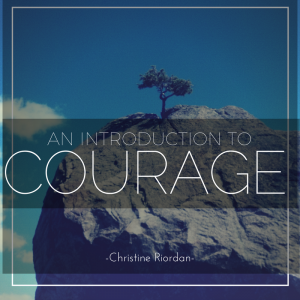 Courage isn’t easily won, it’s something that one has to fight for; it means coming face-to-face with things that are frightening, things that are outside of normality –and choosing to say yes. It’s easy to feign bravery, but just as easily, we can curl into the fetal position like the cowardly lion from the Wizard of Oz. However, there are instances when our goals are tested, when people need us the most, and that’s when we demonstrate unknown strength. Like the cowardly lion, we tend to find that we had the courage all along when standing against all odds, proving to be extraordinary.

Extraordinary people are stimulated by the notion of risk-taking, they’re drawn to the idea of stepping out and being bold. Even shy people can be extraordinary, finding the courage to step up in front of thousands. The most unlikely people choose to be NBA players, astronauts, television producers, and CEOs. The decision to take risks and make bold choices is often rewarded.

In the face of overwhelming odds, companies have remained successful. Starbucks, for instance, has done this. One of my favorite books happens to be “Onward: How Starbucks Fought for its Life without Losing its Soul.” It tells the story of the company’s executives, and their journey toward continued success despite the threat of risk, public failure, and personal failure after experiencing a 42 percent stock drop following the onset of the recession.

Rather than give up, Schultz, the chairman, returned as the CEO; he closed stores across the U.S. for 3 ½ hours to retrain baristas; he invited people to email him directly, and immediately received 5,000 emails, and he launched Starbucks’ first national advertising campaign. He raised wages and offered healthcare to employees, he compensated loyal customers with rewards cards; and he did it although no one thought it could be done. He warmly laughed in the face of naysayers, because courage had won. Having faith in one’s own intuition is more important than presiding fear or doubt. Fear and anxiety are normal in challenging situations, but Nelson Mandela said it best, when he stated, “courage is not the absence of fear, but the triumph over it.”